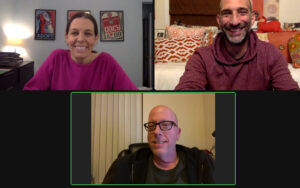 Writer/Director Alan Wood brought his feature  film “Life’s A Bitch And Then One Kills You,” affectionately known as “LABATOKY,” to Film Invasion Los Angeles in 2020 and his remarkably talented cast went home with the Grand Jury Prize for Best Performance by an Ensemble.  This smart, hilarious, and sexy film is one you should definitely see!  Just go to the Milepost 42 Films official website and have a look at this and all of Alan’s other projects.

Alan was joined in this podcast by Sarah Sypniewski, who is a producer and lead actor in his newest project Clown Car: A Love Story.  I didn’t put her name in the title of this episode because the interview is mainly about LABATOKY, but she answered the 4Qs with Alan in the next episode and her name will be in the title for that one!