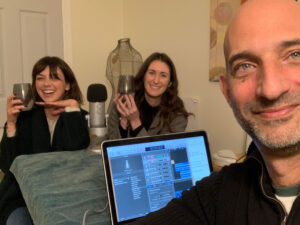 As talented filmmakers and improvisers, Bree Helders & Lyndsey Frank wrote, directed and starred in the short film, “Bree and Lyndsey are Actors.”  At Film Invasion Los Angeles in 2021, Bree & Lyndsey the audience Award for Best Comedy Short and shared the Grand Jury Award for Best Actress in a Lead Role as Co-Leads.  Almost as exciting is that their film is part of Season 5 of the Discover Indie Film TV Series on Amazon Prime Video.  But this podcast is about Bree & Lyndsey answering the Four Questions above – Enjoy!

You can learn more about at Lyndsey at @lyndseyisfrank and more about Bree at  breefroymlapuente.com.