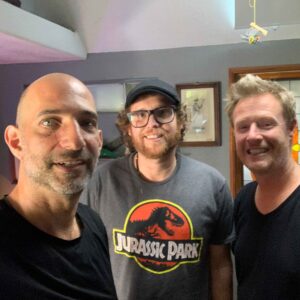 Full disclosure… I love Ari Schneider and Ryan Barton-Grimley.  I saw the first feature film that they made together, “Elija’s Ashes,” back in 2018 after meeting Ryan at Film Invasion Los Angeles in 2017.  (Ryan was there with another feature, “Repatriation.”)  Ari and Ryan are the real deal, an on-screen comedy duo.  Back in the golden age the studios knew the value of keeping pairs with comedic chemistry together for multiple films.  Luckily, Ryan and Ari are keeping the tradition alive.

Another disclosure… this was my first ever “remote” podcast.  I showed up at Ryan’s home office and we recorded three people with one microphone in a big room with an open door.  Don’t expect it to sound like we were in recording booths!

So be smart and go to Justwatch.com and watch this hilarious film with horror touches and an 80’s vibe.