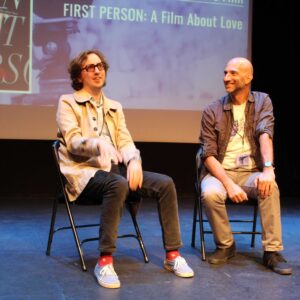 Ashley Cahill wrote and directed the feature film “FIRST PERSON: a film about love” and his film won four Grand Jury Prize Awards at the Sherman Oaks Film Festival back in 2019.  Ashley hopped onto Zoom for a London to Los Angeles interview and of course I had him answer the 4Qs above. I’d only had a few chats with Ashley at the 2019 festival but I was sure that this cinefile was sure to have a great list.

Ashley is a talented filmmaker but I also want to mention that he’s an extremely talented painter. Take one look at the artwork on his website Cahill.studio and I’m sure you’ll agree.