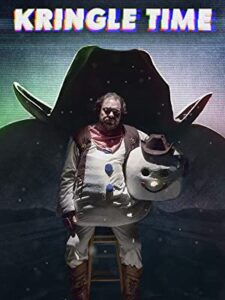 “The manager of a small town public access station questions the legacy of his favorite children’s show mascot when he learns that the man inside the costume had been carrying a dark and scandalous secret.”

The reason that I love this film is that it accomplishes the rare feat of creating an exaggerated world of comedy and pain, resulting in dark comedy that somehow feels more realistic than imagined.  Add to that mix a remarkable cast, excellent direction, and the independent spirit you get when a bunch of friends who work on others people’s films for a living jump on the chance to do something for themselves, and “Kringle Time” is not a film that any fan of Indies should miss.

To see where you can watch this film, hit the IMDB page or visit Rotten Tomatoes, where it currently has a sweet 82% rating.

If you want to hear the DIF Podcast interview with writer/director Matthew Lucas, click right here.

The goal is so focus on Indies, but Hollywood fare is fair game, too!