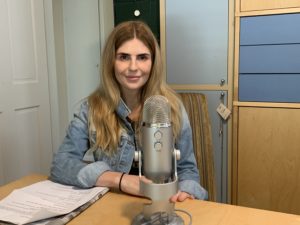 The first time that I saw The Wind Phone, I was simply blown away.  It is a masterful work of art in every way.  Set in Japan and subtitled in English, I assumed that this incredible film had been submitted to Film Invasion Los Angeles from a brilliant filmmaking team based in Tokyo that would not be able attend the festival and whom I would never meet.

The film was submitted by an agency based in Berlin, so you can imagine my surprise when I found out that the film was made by a Los Angeles based team!  Not only that, but when we screened the film in June 2019 the entire Japanese American cast joined writer/director Kristen Gerweck onstage for a wonderful Q&A.  The Wind Phone, by the way, went on to receive SIX AWARDS from FILA 2019.  Not too shabby.

I had Kristen over for a podcast interview in August and we put it in the vault.  Kristen had high hopes for the film’s chances to compete for an Oscar and my hopes were nearly equal to hers.  Every year I go watch the Live Action Short category of Oscar Nominees and every year I think of films that screened at Film Invasion L.A. and the Sherman Oaks Film Festival that deserved that honor.  The Wind Phone is on that list in my head.  And you know what?  It might happen!  Cross your fingers and your toes, because Kristen and her producer Linda Christina Riedmann (whose interview will get posted in week or so) let me know that The Wind Phone cleared the first hurdle and is eligible to make the Oscar’s short list of ten live action short films that compete for the Best Live Action Short Oscar!

So look… SPREAD THE WORD!  Got friends in the Academy?  Got friends who have friends in the Academy?  Tell them to watch The Wind Phone.  They will know how.  It is really about the right people actually seeing the film, because if they see it then I have no doubt they will support it.  But they have to take the time to see it.  They have to now that this one is special.

Ok.  That was a lot of rambling.

Maybe you should just listen to my interview with Kristen which is about how she became a filmmaker via law school, the film that she made before The Wind Phone, and more.