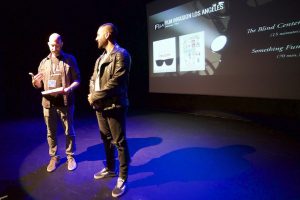 What is DF4Q?  It’s the Discover Film Four Questions.

The first time I met Mikhael Bassilli it was because he had won the screenwriting competition 100 Screenplays in 2017.  (You can see me about to hand him the award in that pic.)  A few months later, he submitted the great short film Immersion to the Sherman Oaks Film Festival and we selected it to be the opening film that year.

You know I love to hear people’s DF4Q’s and considering Mikhael’s incredible work output, I was very curious to hear his favorites.  Give it a listen!