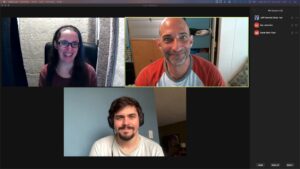 Sarah Beth Goer & Kip Calendine collaborated on the feature film “Three Roads,” an indie feature near and dear to me.  It represents the kind of grass roots, from the heart filmmaking that keeps me excited about indie film.  Sarah wrote, produced and starred in the film while Kip wrote, produced and directed.  You can watch “Three Roads” right now on the Three Roads Vimeo page for free!

I highly recommend that you watch this film before you listen to the interview, but I won’t be too mad if you watch it after.