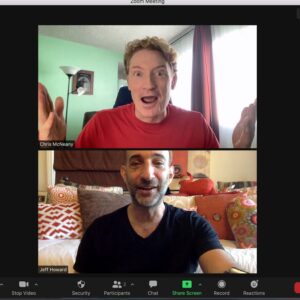 Christopher McNeany wrote, produced, and is the lead actor in the short film “More Than He Knows” that came to the Sherman Oaks Film Festival in 2021.  “More Than He Knows” holds the prize for “Sexiest Film of the Fest,” which is an unofficial award that I keep thinking about making official.  Aaaand… it’s official.  I just added that prize to the SOFF 2021 Awards page.

Normally it takes a while for a filmmaker to go from festival to podcast, but Chris was literally wrapping up his festival run at SOFF and I was delighted when he said he wanted to do a podcast and have “More Than He Knows” join season 5 of the Discover Indie Film TV series.  Season 5 should be released this March, but if you want to watch other superb indie shorts just go to the Discover Indie Film TV Series on Amazon Prime Video!  And if you don’t want to wait for the “sexy as f*ck” editing of “More Than He Knows” to be in the DIF TV series, you can watch the “sexy as heck” edit of “More Than He Knows” right now on YouTube!

I hope you enjoy the interview as much as I did!