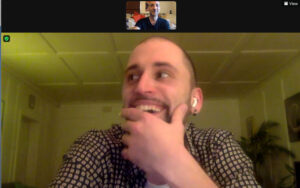 Otis Birdy jumped onto Zoom for interview about his directorial debut “Jiyan,” which screened at Film Invasion Los Angeles in 2020 and and took home a Programmer’s Award.  Everyone who does an interview gets to answer the 4Qs, and Otis was glad to do it!

To learn more about Otis and his work, go to Otisbirdy.com and for his film visit jiyan-film.ch.