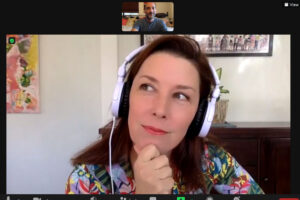 Jean Villepique brought her short film “IV-Effing” to the Sherman Oaks Film Festival in 2019 and went home with two awards, including Best Short Film – Comedy!  You should know Jean from her appearances on such TV shows as A.P. Bio, Sharp Objects, The Office, Veep, and dozens more, but if you manage to see “IV-Effing” you’d know that her years of improv and storytelling have made her an excellent screenwriter as well.

As long as Jean hopped onto Zoom for a DIF interview I had to have her answer the 4Qs above.