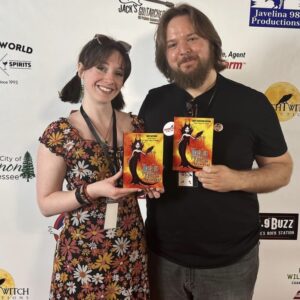 Sarah Cugini & Brandon C. Lay have collaborated on multiple films, all under Brandon’s Living Proof Pictures Brand.  Their feature film, “Bitter Taste of Ginger,” which Brandon wrote & directed, Sarah was the lead actor in, and both produced with collaborators Marcy Repp and Joshua Faturos, came to the Sherman Oaks Film Festival in 2021 and took home two Grand Jury Awards, Best Feature Film – Arthouse/Experimental and Best Actress in a Lead Role  for Sarah!   Their short film “Cueball” played at Film Invasion Los Angeles in June of 2022 along with “Bitter Taste of Ginger,” making it the rare film to play both SOFF and FILA.  Also, Sarah is the first and so far only actor to take hime the Grand Jury Award for Best Lead Role in both festivals!

After their DIF interview, of course I had them answer the 4Qs above together.

To learn more about this team and learn where you can watch their films, visit Livingproofpictures.com. & @living.proof.pictures on Instagram.

You can also hit Sarah’s wonderful Instagram at @sarah_bear912