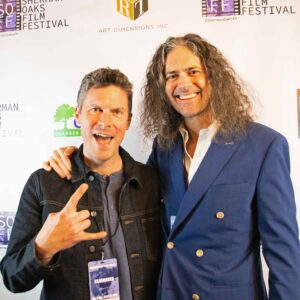 Aaron Hagele & Tim Slowikowski made the documentary feature “Party Dream,” which you can watch right now by clicking the Party Dream justwatch.com page.  This fantastic film took home the Grand Jury Award for Best Feature Documentary at the 2022 Sherman Oaks Film Festival and I’ve been shouting at strangers on the street to watch it ever since.

It is rare, almost unheard of, for a film to be released so soon after I meet the filmmakers at SOFF, so this is an especially fun podcast for me. Tim and Aaron are wonderful, humble people who truly set out to make a film for all the right reasons. That’s probably why it turned out so well.

Watch the film, listen to the interview, and become a fan of the “Party Dream” movie and the band it’s based on, “Gil Mantera’s Party Dream,” the craziest band you’ve never seen.

If you want to read it, here’s my DIF Review of Party Dream, as if you didn’t know what I think of this film.