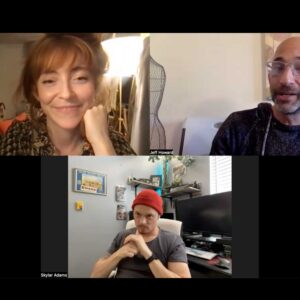 Sarah Lyddan & Skylar Adams co-directed, co-produced, and co-starred in the film that Sarah wrote for them, “Lonely Night.”  This film is a thoughtful and tense exploration of two characters in a situatios that feels one part Shkespeare and one part zombie flick. “Lonely Night” took home three awards from the Sherman Oaks Film Festival in 2021.  If you want to learn about Sarah & Skylar, listen to the podcast before this one, because THIS podcast is all about these two answering the 4Qs above.

You can learn more about Sarah on Instagram at @sarahlyddamn