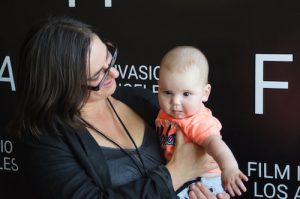 The first time I ever programmed a film festival was Film Invasion Los Angeles in 2016.  The first film that screened was The Hunter.  Which means that my first  Q&A with (as the Q, not the A) was Miri Stone.  Like all Q&A’s, we only had around 10 minutes to talk, so this filmmaker from Seattle with a New Zealand accent who made an incredible original short film remained a mystery to me.  She’s not a mystery any longer!

Miri would have been one of the first interviews on this podcast, but we waited until The Hunter became available online.  And if you look to the right, you will see that she came down from Seattle to open the festival with her newborn child.  Talk about a magical way to begin a festival!

The Hunter is a beautifully made film and I’d always wondered what was behind it.  Miri shares where it comes from and more.  When you hear her history, you will clearly see that her entire life has primed her to make inventive, fantastical films.

Before you listen to the podcast… watch The Hunter.

THE HUNTER from Miri Stone

You can listen to the podcast using the media player below or on DiscoverFilm.net  iTunes, Google Play, SoundCloud, or Stitcher.