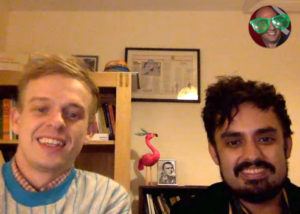 Varun Raman & Tom Hancock made the brilliant short film Transmission.  It was a standout at the Sherman Oaks Film Festival in 2017.  Even though they live in the UK, we hopped on Skype for a few hours to record an interview and a DIF4Q.

What were Tom & Varun’s DIF4Q answers?  Some they did as a team, some on their own.